Video of “Leveraging Ruby Libraries”, my webcast for O’Reilly, has been posted. It’s a whirlwind tour of some of the cool things you can do with Ruby’s core classes, standard library, and third-party gems.

Just sign up here (make sure to un-check the two boxes so they don’t spam you) and you’ll be e-mailed a link to the presentation immediately.

The InDesign tutorial that I received when starting on my Head First book was helpful, but there were some super-useful InDesign features it didn’t include. I shared this list of my favorites with my fellow authors, and figured I would copy it here…

And remember, search engines are your friend! If there’s something you want to do but you don’t know the name of the feature, just type “indesign” into a search engine, followed by a brief description of what you’re looking for. You’re almost certain to stumble upon a forum post with the answer.

One reason this blog hasn't seen an update in forever is that I've been writing a book! O'Reilly will be releasing Head First Ruby in mid-November. 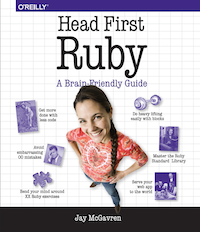 You can get access to the Early Release right now on O'Reilly's shop.

Or, you can pre-order from Amazon.

The danger of habits...

In the late 20th century, I received a thorough mocking for only putting one space after my periods. “Everyone puts two spaces after a sentence, don’t you know that?” I switched, and have been using two spaces for over a decade.

I have a very heavily-ingrained habit to undo:

Why You Should Never, Ever Use Two Spaces After a Period

I’m working on a book right now, and the publisher is going to expect single spaces after each and every sentence. Even if I take corrective action now, some are still going to slip in, and it’s going to be very time-consuming and error-prone to track them down.

Do your kids a favor, and ensure they’re being taught the single-space style.

Malware and your brain...

Consumer-level brain-computer interfaces (they exist!) are rather limited at this point, and therefore so is this hack. Still, this is troubling.

Object recognition brainwaves can reveal sensitive info about you

I, for one, am really eager to control my computer with my mind. But I had never thought about the possibility of malware that could read my thoughts…